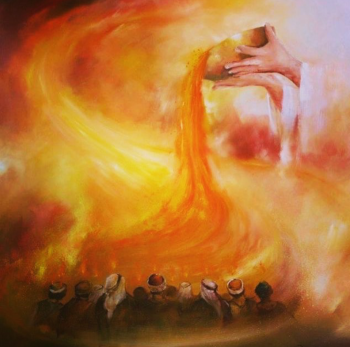 Have you ever witnessed a miracle that happened right before your very eyes? Whenever God is a part of any equation, something miraculous is bound to happen. “True Stories of the Miracles of Azusa Street and Beyond” is the book I chose to share with you. It’s a power-packed non-fiction novel that’s filled with testimony after testimony of incredible stories of ordinary people who received extraordinary life-changing miracles. “This is an amazing book!”

“True Stories of the Miracles of Azusa Street and Beyond” is written by Authors Tommy Welchel and Michelle P. Griffith. This incredible little book contains a total of 176 pages, but it is filled with ‘Divine Miraculous Healings’ straight from heaven. These are not ordinary everyday miracles that a pill can cure, nor are any prosthetic parts used to help the disabled become mobile again. The Shekinah Glory Cloud actually rested on Azusa Street for 3 1/2 years, which is the same amount of time that Jesus’ ministry existed on earth. It was 3 1/2 years of jaw-dropping, eye-ball-popping, incredible miracles that happened on Azusa Street.

This revival was closest to all that the Apostles experienced in Acts Chapter Two. The day of Pentecost is a testament to the arrival of God’s promised Holy Spirit. The miraculous took place there. Tongues of fire appeared and set every heart aflame. There was a baptism of the Holy Spirit that caused men to speak in other languages. Every man who heard what the Holy Spirit was saying heard him speak in their native language. On that day, three-hundred people gave their lives to the Lord.

AZUSA STREET AND THE SHEKINAH GLORY

Azusa Street Revival was located at 312 Azusa Street, Los Angeles, California. The recorded miracles happened from April 1906 to Nov. 1909. The glory of God inhabited this former warehouse and stable in the early years of the twentieth century, releasing miracles of healing 24 hrs. a day, 7 days a week, for 3 1/2 yrs. Missing limbs grew where none, eyeballs filled in empty sockets, cancerous growths fell off, and lives were restored as the Shekinah Glory filled the building.

This same glory cloud dwelt within the Azusa Street mission walls and even hovered around the outside of the building during the revival throughout the entire mission. Sometimes flames could be seen shooting from the rooftop of this mission, converging with flames shooting from the sky into the mission described in Exodus 13.

God chose the least likely of vessels to use to display His glory. The miracles perform were not done by big-name preachers. God used ordinary teenagers and young people to do extraordinary work that was accomplished through them by Him. These children gave up playing after school to go to the mission and witness and perform miracles. Some began as early as 12 yrs old.  Some of these teenagers went on to start some of the most significant religious movements of our time.

God called them, anointed them, and filled them with His Spirit to accomplish wondrous feats that the modern world could only hope to witness. These young faith healers came together on one accord to see the sick healed, to lay hands, and pray. What took place on Azusa Street happened right before the eyes of many witnesses.  People came from various parts of the world to be apart of this ministry. Many came for healing, while others witnessed the miracles they had heard about, which were taking place on Azusa Street.

In preparation for writing this book review, I compiled a total of 57 pages of notes. There were over 100 miracles performed at the hands of various faith healers. There were at least 31 different types of healings. Eye sights were restored, deaf people were able to hear for the very first time. Diseases were cured. Tumors were removed, cancers were cured, people with dysfunctions and infirmities were loosed, and the list goes on and on…

Here are a few examples:

This was all done by the power of the Holy Spirit, through the hands of those who had faith the size of a mountain. They believed in the miraculous power of God operating here on earth! This same power dwells inside of believers today!

“Let us not waste the anointing on simply experiencing a happy party. Let us take the power of the flaming tongue for the reason it was first sent into the Pentecostal upper room. You shall receive power when the Holy Spirit comes upon you, and you shall be my witnesses in Jerusalem, Judea, and the uttermost parts of the earth.”  ­- Tommy Welchel

Since the day that I started reading, True Stories of the Miracles of Azusa Street and Beyond, I couldn’t wait to share how this book changes its readers’ lives. These stories are so incredible that as they are read, the reader’s faith shows ownership, and their belief in the power of God is strengthened. It also reassures us that God still heals today! The most exciting thing that I want you to know and believe in is that God can perform incredible miracles using ordinary people like you and me. Please be encouraged and continue to believe in the miraculous moments in your life! With God, all things are possible to those who believe.

Pick up a copy of True Stories of the Miracles of Azusa Street and Beyond, and Prepare to experience a fresh outpouring of God’s Spirit Now!

Join me on Periscope today! I’m looking forward to a chat with you!

Photo: “Out Pouring of the Holy Spirit,” shared from Pinterest.

5 thoughts on “Book Review: True Stories of the Miracles of Azusa Street and Beyond”